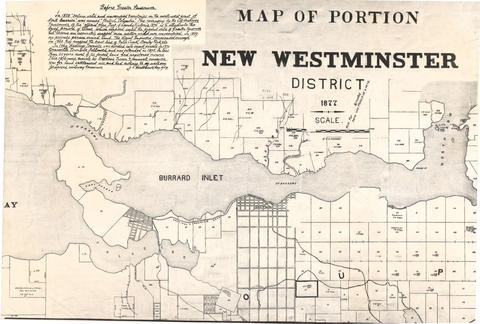 Item is an annotated tracing of a map showing the future sites of Vancouver, Burnaby and the North Shore from an area bordering on English Bay to an area bordering on North Arm. Traced over by J.S. Matthews in 1954, it illustrates intended land settlement and subdivision in 1877. Also shown are bodies of water, Hastings & Granville Road, and the settlements of Hastings and Granville. Annotations are an introductory note by Matthews in August 1954 titled "Before Greater Vancouver." Enclosed with the map are four letters between J.S. Matthews and W.H. Hutchinson, Chief of the Geographic Division of the B.C. Survey and Mapping Branch of the Department of Lands and Forests, in 1954 concerning the map's provenance and Matthew's efforts to increase the legibility of copies of the original map.

Map had previously been alienated from its original fonds and placed in AM1594.

Map 1055.02 is the original photocopied map on which J.S. Matthews made the tracings in white pen and darkened the background in an attempt to improve legibility. Correspondence relating to this map can be found at 847-A-3, folder 38.