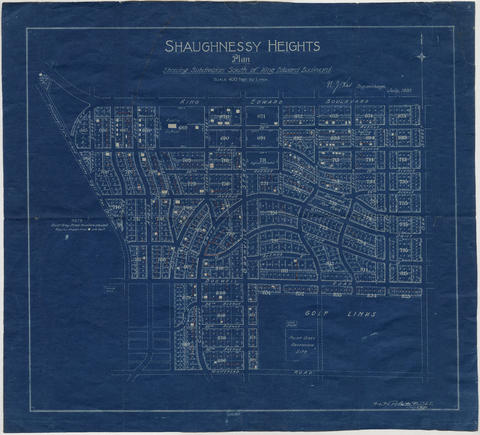 Hugh Henry Roberts was a civil engineer and British Columbia Land Surveyor; he was a partner in the Vancouver firm Taylor & Roberts from ca. 1915.

Hugh Roberts was born Feb. 7, 1883 in Wales, and emigrated to Canada in or before 1907. He first appears in the Vancouver directories in 1908, as an employee of Thomas H. Tracy. By 1912 he was at the firm Garden & Taylor, where he was soon made a partner. Taylor retired in the late 1930s or early 1940s and from then to his retirement in 1964, Roberts operated under his own name only.

Item is a subdivision map of the Shaughnessy neighbourhood south of King Edward Avenue ("second Shaughnessy").