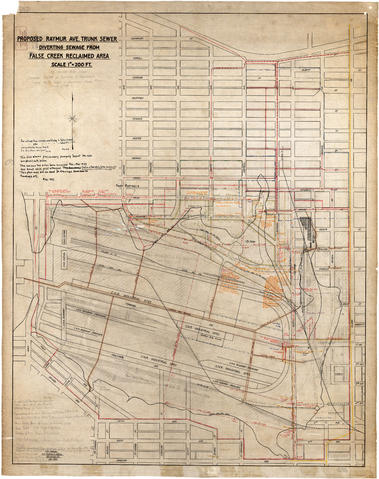 Map shows the proposed Raymur Avenue Trunk Sewer to divert sewage away from the False Creek reclaimed area. It includes the area from Main Street to Clark Drive and from Alexander Street to Seventh Avenue. Streets and blocks are shown. The map was heavily annotated between 1936 and 1941, and a preliminary pumping layout to Clark Drive was added in December 1936. Also indicated are the locations of sewers, pumps, drainage and elevations; the Canadian National Railway (C.N.R.) Station, lines, industrial sites and proposed roadways; the Great Northern Railway (G.N.R.) Station and lines; a proposed rail yard; and the City Dump.

Use microfiche copy in Reading Room.

Missing areas have been repaired.

The plan has been numbered 1233 in pencil.