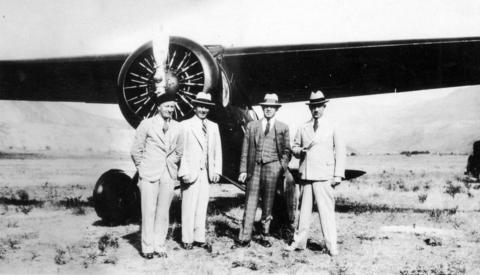 Item is a photograph. Notes written on the mounting paper include: " r. to l. Charlie Anstee, a high official of Shell Oil Co., A. McLachlan, Supervisor, Wharf Customs, Bill Templeton, Airport Manager, Pilot Fletcher of the Shell Oil plan, later killed in a crash near Seattle. Date and place not known; High Wing Lougheed Vega, a land plane. Mr. Way and pilot Joe Meagher flew to Seattle in it and flew back over the San Juan Islands at 16,000 feet. The pilot flew at that height because land planes were not supposed to fly over the water but at that height the pilot thought if anything went wrong he could glide to safety."