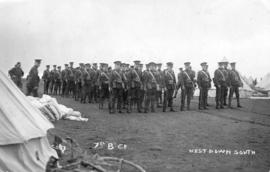 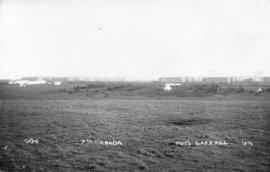 John Weightman Warden (1871-1902) was a native of Bayswater, New Brunswick. He served as a scout in the South African War and remained there as a member of the South African Mounted Police in Wakkerstroom, Transvaal. He came to Vancouver in 1907 as the representative of the Montellious Piano Company, entering the brokerage business in 1909. During this time he was active in the 6th Regiment, D.C.O.R. and saw service during the Nanaimo Strike of 1913-1914 and the Komagata Maru incident. In 1911 he went to the Coronation and Bisley as part of the Canadian delegation, and in 1914 he was elected a councillor in West Vancouver. He served during World War I in the 7th Battalion, 1st B.C. Regiment, and was wounded at Ypres. He was consequently invalided home to Canada, where he organized the 102nd Battalion, North British Columbians. He also served as 2nd in Command of General Dunsterville's force in Mesopotamia in 1918, took part in the Allied intervention in the Russian Civil War (1918-1920), and commanded a Russian Officer's training school in Vladivostok (1919). The following year he returned to British Columbia, standing unsuccessfully as a Conservative candidate in the provincial election. From 1923 to 1928 he was the international representative of the West Coast Lumber Association. He served as the governor of the Essex County Gaol in Sandwich, Ontario, from 1930 until his death.

The fonds includes personal papers and correspondence covering Warden's war service, the Russian Intervention and his post war activities with the West Coast Lumber Association, veterans groups and the Essex County Gaol; a file of newspaper clippings; five notebooks (1905-1919); an army paybook; rifle range notes; typed manuscripts based on his diary; and a notebook of rules he drew up for the Essex County Gaol. The photographs cover the period ca. 1883- ca. 1920, with the majority documenting his wartime service.

Presented in 1942 by Olive and Ruth Warden.

Photographic images in this fonds have been assigned catalogue numbers with the prefix CVA 802.