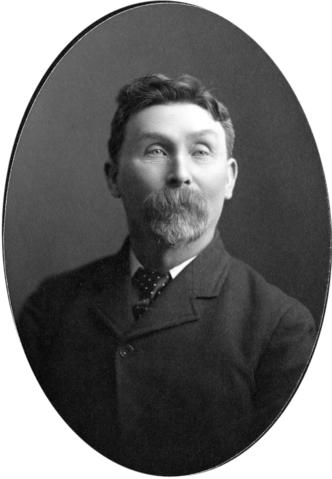 item is a photograph that is a head and shoulders portrait mounted on board. On the back are pasted two pieces of paper--one handwritten, one typed--that appear to have been created by City Archivist Major Matthews.

The handwritten one says: "John Callister of "Callister Park", 1842-1934. Pioneer, Burrard Inlet, April 1885; Lost all in "Great Fire, 1886; Built and half owner "Ellesmere Rooms", Pender and Homer, May, 1887; supported Vancouver Reading Room, (public library); a founder and Hon. President, Vancouver Manx Society, 1909; Pioneer, Hastings Townsite, 1905; in Mar. 1942, a block of land, part of his estate, a home and garden made by him from a clearing of stumps beside a forest, with its summer fires-- was presented to the Citizens of Vancouver by a devoted niece, his sister's daughter, Mrs. Ada M Stevenson, 2596 Dundas St. and, under deed of gift, named "Callister Park" in his honour."

The typed one says: "John Callister. Pioneer, April 1885, Burrard Inlet. Uncle of Mrs Ada M. Stevenson, 2596 Dundas Street, who, in about the 25th-30th March 1942, presented to the City of Vancouver a block of land, formerly known as "Con Jones Park", although Mr. Jones had little to do with the 'Park', and renamed "Callister Park". Mr. Callister was a Manxman, was one of the founders of the Vancouver Manx Society, was born 1842, died 1934. He was also one of the supporters--with cash--of the Vancouver Reading Room, Cordova Street, 1888 or 1889. He built the famous "Ellesmere Rooms", n.w. corner Pender and Homer, 1886 or 1887, and was half owner. (see his file, also "Callister Park". Presented, 7th May 1942 by Mrs Stevenson."