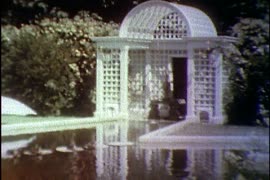 Item is an amateur film which captures shots of Margaret Magoffin among unidentified others walking through a large garden, including shots of flowers, water features, arches, peacocks, and pigeons. This is followed by footage of a group of men and women (including Sam and Margaret Magoffin) swimming and lounging in an outdoor swimming pool.

Also contained in the film is what appears to be footage of the development of the Magoffin's "Rockhaven" home at 3612 Marine Drive in West Vancouver (likely around 1929); along with shots of the property's vantage point of the Burrard Inlet, footage of laborers digging earth and forming stone retaining walls is captured. This is followed by shots of unfinished foundations of one of Rockhaven's structures and a steam shovel excavator.

Also contained in the film are shots of Rockhaven after completion: footage of flowers growing around the grounds are captured, along with the newly completed retaining wall above the large outdoor pool. This is followed by more shots of flowers interspersed with several shots of a Golden Retriever believed to be the famed Speedwell Pluto; shots of the waves against the property's shore; two Golden Retrievers in the grass yard by the water; glimpses of the Rockhaven house's exterior; and Margaret's mother, Mrs. Boalt, standing by the house.

The film closes with shots of a group posing for the camera, including Sam Magoffin, Margaret Magoffin, Mr. and Mrs. Boalt, a golden retriever, and the group swimming in Rockhaven's outdoor swimming pool.