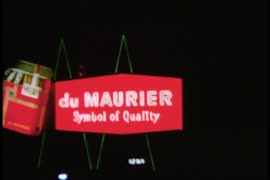 Item is an amateur film documenting Vancouver city lights at night in 1964, including several neon signs and Theatre Row on Granville Street. The film also contains snow scenes and footage of the William Gardner family at Capilano Road in North Vancouver in December 1964 and January 1965, and footage of the family at their West Vancouver home between May and July 1965.