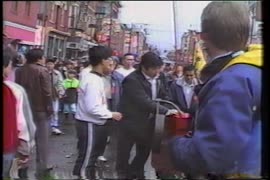 Item is an amateur home movie of the 1991 Chinese New Year’s parade in Vancouver. It includes footage of the parade from East Pender Street outside the Chinese Cultural Centre and from Keefer Street just outside the entrance to the Dr. Sun Yat-Sen Gardens. Also included is footage of vendors and tables inside the Chinese Cultural Centre, scenes of families inside the Dr. Sun Yat-Sen Gardens, primarily inside the main pavilion, a view of the water and railings, and through the moon doorway. 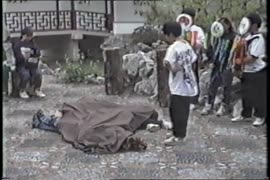 Item is an amateur video recording of a theatrical presentation by a grade 5 class from Hastings School, filmed in the courtyard in front of the main hall. The presentation is a creation myth story in which a trickster monkey builds dolls out of mud which are then animated by thunder and lightning. These ‘bagheads’ travel between several worlds and encounter various strange creatures before finding the perfect world and removing their masks to become the first people. Presentation includes footage of the spectators and teachers. 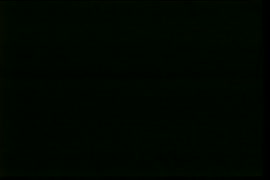 Item is a short documentary exploration of the Dr. Sun Yat-Sen gardens with a meditative, philosophical, and poetic approach. The narrator speaks about some of the essential elements of a classical Chinese garden: Water, Rock (Mountains), and Buildings, followed by recitations of poetry by Ge Gong and Tao-yün. The occasional narration is accompanied by zheng music and a selection of garden scenes that illustrate many of the different ‘views’ of the garden that are relevant to the narration. Special attention is given to the flow of water over the rocks, the railings, screens, and leak windows, and a high vantage point view of the whole garden from the mountaintop pavilion. 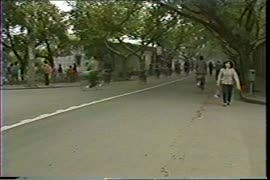 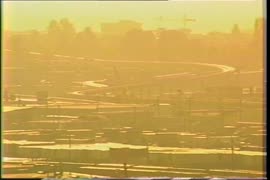 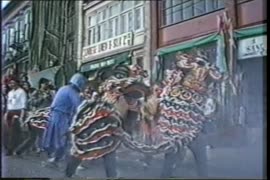 Item is a documentary film about the Taoist meanings of various elements of the design in the Dr. Sun Yat-Sen garden. The film opens with a street scene of Chinese New Year, including lion dances, firecrackers, and a parade. The main film is an interview with James Yu, the maintenance coordinator of the garden. He discusses the contrasting elements (yin and yang), the different kinds of plants (plum, bamboo, and pine), the leak windows, the upturned eves, and the reflections in the water, and then presents a Taoist interpretation of each of them. The narration is supplemented with film footage of the gardens illustrating each point in turn. The film concludes with more footage of garden views and details. 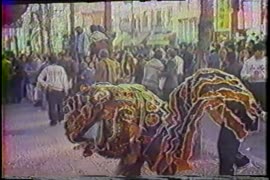 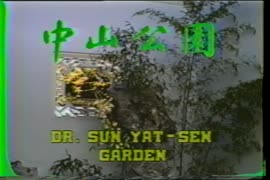 Harmony in a garden

Item is a short documentary tour of the Dr. Sun Yat-Sen Garden with a focus on the philosophical Taoist elements. It discusses how each of the four major garden elements (buildings, rocks, plants, and water) is represented in the garden, and explains some features in the context of Taoist balance and function. This discussion is illustrated with footage of the relevant elements and Chinese style background music. 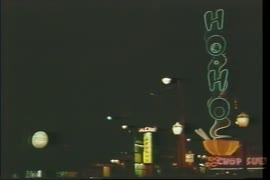 Inside the circle, outside the square

Item is a montage video of photographs of the Dr. Sun Yat-Sen gardens with musical accompaniment. The film begins with images of street scenes in Chinatown, focusing on neon lights, nightlife, and shops. The visuals segue into peaceful scenes of the gardens, focusing primarily on the views of the garden through the leak windows and screens, the curved roofs of the pavilions, the water and reflections, and the patterned paving stones. 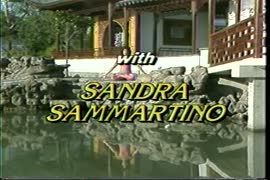 Item is a television program in which Sandra Samartino performs yoga in the Dr. Sun Yat-Sen Classical Chinese Garden. The production is accompanied by repeating electronic music, but there is no narration. The yoga poses are set against the rocks, moon gates, lattice work, pavilions, and often presented only reflected in the water. 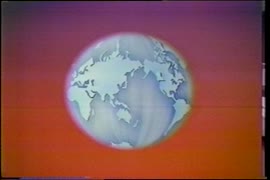 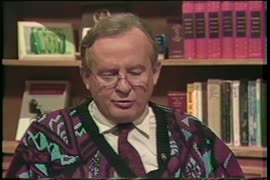 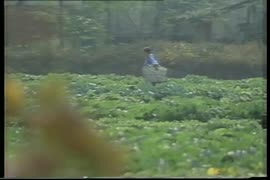 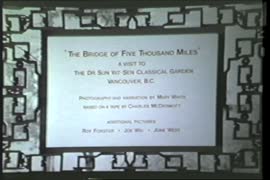 The bridge of five thousand miles

Item is a video photo montage ‘walking tour’ of the Dr. Sun Yat-Sen Garden, narrated by Mary White. The film discusses the history of Chinese gardens and the history of the Dr. Sun Yat-Sen garden, including a discussion of the construction materials and techniques, and the artisans who built it. Different architectural elements of the garden are considered, and their function and meaning discussed. The philosophical elements of garden construction as an art form are discussed throughout.