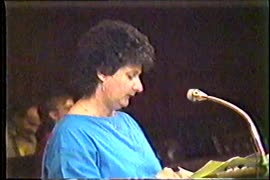 (00:55:12 – 00:57:30)
This is unidentified news coverage of the 1990 Vancouver Pride Parade. The report includes footage of the parade and interviews with attendees and participants.

(01:53:09 – 02:15:52)
This portion of the tape contains a program recorded from television entitled “AIDS: In search of a miracle” part of a series “Managing our miracles: health care in America” by Columbia University and originally broadcast on PBS.