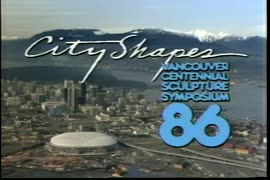 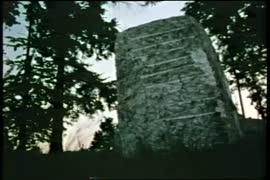 Item is a documentary film about the 1975 Stone Sculpture Symposium in Vancouver. The film is a combination of footage from the sculpting event and voice over narration discussing both the symposium itself and the sculpting process. Abstract electronic score by Martin Fossum plays sporadically throughout.

The film begins with footage of the original marble and travertine blocks, and follows the sculpting process to the end, including footage of hand and mechanical chiseling, polishing and grinding, and moving the works to their final positions. Over this footage the narrator discusses the rebirth of stone carving in the 20th century, the history of the symposium, the relationship between the artist, sculpture, and the natural surroundings, and the importance of the final positions to the creative process.