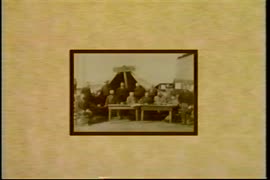 Vancouver : a year in motion

Item is a videocassette containing interviews of photographers involved in a Vancouver Centennial comemmoration project.

In anticipation of the centennial year, Tom Sutherland and Cindy Bellamy worked with over fifty photographers to put together a photographic portrait book of Vancouver called “Vancouver: A Year in Motion”, intended to capture the face of the city at teh Centennial. Producer/director Craig Sawchuk followed and interviewed eight of the photographers for a documentary about the project.

The documentary follows Heather Dean, an aerial photographer, in a helicopter over Vancouver showing aerial views of the city including popular landmarks such as Canada Place, the Science Centre, BC Place, and the harbor. Sterling Ward spends some time photographing the development of the Expo 86 sites, a roller coaster, and some of the sculpture installations. Al Harvey takes candid shots at the beach during the polar bear swim and celebration on the first day on 1986. Colin Savage discusses remote control photography and swims with a dolphin and beluga whale at the Vancouver Aquarium with trainer Doug Pemberton. Albert Chin photographs a traditional Chinese lion ceremony for the opening of a new restaurant in Chinatown. Derik Murray was the official photographer of the Vancouver Canucks and the documentary follows him to a hockey game (Vancouver Canucks vs. Boston Bruins). Greg Athens does a photo shoot on Grouse Mountain with professional freestyle skier [Darryl Bowie]. Lloyd Sutton spends time on Granville Island photographing the local scenery, shops, and a glass blowing lesson/studio.