Item is a topographical map used as a base for showing surveying information such as lot numbers, boundaries, contours, bearings, pipelines, bridge and rail rights-of-way and other landmarks on the Kitsilano Indian Reserve. The map was likely used in planning the development of Vanier Park and/or the Vancouver Museum in the mid-late 1960s. Annotations show "most likely entrance" at McNicoll Avenue. 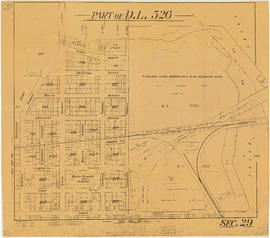 Item is a sectional plan which shows the area of Kitsilano Point and the adjacent area of Kitsilano south to 1st Avenue in the south and Arbutus Street to the west. The map includes the CPR right of way and harbour headlines, as well as the Vancouver and Lulu Island railway (CPR). 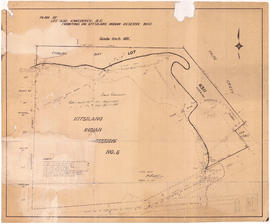 Item is a site plan of the R.C.A.F. station on Kitsilano Point (currently Vanier Park), as well as adjacent areas. The map shows lot numbers, roads, buildings, breakwaters, hangars and barbed wire entanglements on the base. Buildings are numbered, so it is likely the map was created to accompany a report or other document.

Map is a plan of the Kitsilano Point area showing the area currently known as Kitsilano Beach and Vanier Park, and streets and blocks between Maple Street and Centre Street (Granville Street) and First Avenue to Third Avenue. The plan shows in detail the land designated as the Kitsilano Indian Reserve, including the original reserve as constituted prior to Confederation, the addition made by the Joint Commission on 15th June 1877, and land leased to Harrison Mills T. and T. Co. Map also shows the location of Canadian Pacific Railway land, the Vancouver and Lulu Island Railroad, Rat Portage Lumber Company, Tait's Mill, the Third Avenue Bridge and bathing beach. Annotations in ink indicate the location of Sam Greer's house and garden and nearby spring on what is now known as Kitsilano Beach. A note made on the front of the map by J.S. Matthews in 1930 reads "This blueprint was given me about 1928 by Mrs. J.Z. Hall, dau[ghter] of Sam Greer, and had evidently been attached to a letter from Hon. H.H. Stevens, M.P. to Mr. Greer, dated Ottawa, May 15, 1923 with enclosure from Dr. Scott Indian Office, Ottawa, 9th May 1923. The notation "House" and "Garden" were, when first received by me, on pencil, rudely written, perhaps by Mr. Greer himself (quite and most likely). The marks were inked in with Indian ink by me." 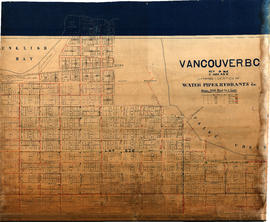 Item is a map showing the location of water pipes and hydrants for the area from Spruce Street to False Creek to Vine Street to Tenth Avenue (D.L. 526). Pipes and hydrants are shown in various coloured inks to indicate Installation date. Includes annotations as to whether pipes are wood or steel. Annotations have been added to a base map that is part of a larger map. 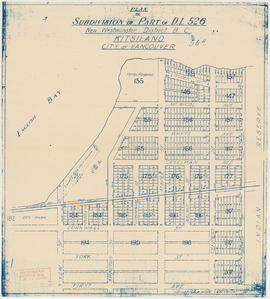 Item is a brochure advertising the sale of land in Vancouver owned by the provincial government. One side of the unfolded brochure is promotional text and an index map showing the general location of the lands to be sold. The reverse of the sheet shows a portion of District Lot 192 and the lots available for sale.