[North to south east view of Shaughnessy from near 37th Avenue]

Photograph shows the Shaughnessy Golf Club and a Fire Hall in the distance.

Panoramic view showing the dredging of False Creek for the Granville Island construction.

Items include an autograph codicil to her will dated 1912 and two autograph letters to Mr. Kitto of Tupper, Kitto and Wightman dated February 5th and 8th, 1913.

Collection consists of two letters on Diamond Jubilee letterhead from the secretary of the Native Sons of Canada to a brother native son.

Item is a printed envelope from the photographic department of David Spencer Ltd. with a price list of services offered.

Part of The Garden Club of Vancouver fonds

File contains: Onward and Upward Association founded by Lady Aberdeen for the material, mental and moral elevation of women selected and introduced by James Drummond ; foreword by Marchioness of Aberdeen and Temair; Vancouver Council of Women study on day care and nursery school needs and services in Vancouver City by Pat Duffy Hutcheon; Vancouver's women based on a brief history of the Vancouver Council of Women [daily agenda]; and Councils of Women in Canada : aims and objectives [brochure].

The game was played at the Athletic Park at 5th Avenue and Hemlock Street.

[Panoramic view of] Dawson City Y.T. [and surrounding area during the gold rush]

File includes 2 photographs showing the before and after of a bulk head replacement project.

Item is a photograph showing a group dining at a table, includes Harry Rankin.

[Portrait of Frank and Phyllis Ross]

Pauline Low and [?] Yu eating together at S.P.O.T.A. event

Collection consists of published items collected by the City of Vancouver Archives. The items in this collection document many of the social and cultural events which have taken place in and around the City of Vancouver from 1860 to the present, and include: brochures, programs, advertising broadsheets, political commentaries, calling cards, menus and more. 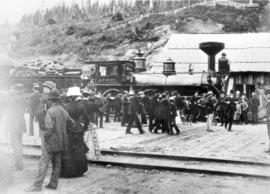 [First through train, C.P.R. locomotive 371, to arrive at Port Moody]

Panoramic view of group portrait of men and women recruits

View of waterfront showing the C.P.R. yard, piers and ships; courthouse under construction; Granville Street from the 500 block and south; Holy Rosary Cathedral and the spire of St. Andrew's Church; the railway station and yard, Kelly Douglas and Co. Ltd. and David Spencer Ltd.; and Hastings Street, streetcars and the Dominion Bank building.

Part of Women's Auxiliary to the Vancouver General Hospital fonds

File consists of slides that appear to be from a promotional set depicting the activities of the V.G.H. Women's Auxiliary. Photographs are showing Auxiliary volunteers interacting with patients, conducting meetings, with hospital equipment, and other tasks.

Part of Women's Auxiliary to the Vancouver General Hospital fonds

File contains the script of a slide-show presentation developed by the Women's Auxiliary to describe their activities.

Panoramic view showing a group portrait, two automobiles covered with plants and flowers, Seaforth Highlanders and a street car in the background

Panoramic view from approximately Pender Street and Granville Street looking north showing the Orpheum Theatre at 805 West Pender Street, the top of the Post Office building and clock tower, the Canadian Imperial Bank of Commerce and the Dominion Building, the World Building (Sun Tower) and Burrard Inlet in the background

Panoramic view showing part of Kitsilano, Fir Street, Fairview and the Kitsilano Trestle Bridge, the West End and Downtown in the background