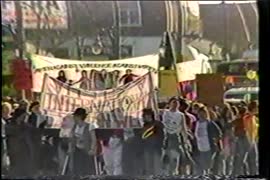 Item is a videocassette containing four episodes of Prism from 1991 to 1993. Prism, the gay and lesbian community affairs television program, was a production of the Pride Festival Association and West End Neighbourhood Television and later in 1993 a production of West End Cable 4. The tape also contains footage from a city council meeting in 1992.

(00:00:00 – 00:28:51)
This 1991 episode is hosted by Alan Segal and Robb Atkinson. The first segment is an interview with a man whose voice has been modified and image is in the shadows to protect his identity. He speaks about gay bashing and his experience when he was verbally and physically assaulted. In the second segment Alan Segal interviews John Eldridge (Witness Assistance Program) about the program. Then Jerry Kowalenko interviews Robert Rothon and Katherine Sharp about Vancouver’s 3rd Annual Out on Screen lesbian and gay film festival. The fourth segment takes place on location at Britannia Park where Glynnis Water interviews Kate Stewart about the Lil Baseball Tournament and the Lesbian League. The episode concludes with a clip of a musical number from “Making of Monsters” with the credits overlaid.

(00:28:52 – 00:57:00)
The July 1991 episode is hosted by Alan Segal and Robb Atkinson and was filmed in Sue [McNaughton’s?] back yard. Paul Lang interviews Lorna Boschman (video/film artist) about her practice. Alan Segal interviews Malcolm Crane (Chairman, Pride Foundation). The episode concludes with two film reviews of “Poison” and “Paris is Burning” by Gerry Kowalenko.

(00:57:01 – 01:29:44)
Before the episode begins there is a Crime Stoppers public service announcement showing five mugshots. This 1991 episode on the world of leather and SM fantasies and fetishes begins with an announcement by Malcolm Crane about censorship and the choice of Rogers Community Cable to disallow a segment for the show. Alan Segal and Robb Atkinson host the episode. Clips from street interviews are interspersed throughout, where members of the public are asked the question “What do you think of people involved in the leather and SM scene?” Alan Segal interviews Bill Houghton and Jean Young about their involvement in the SM community. Sue McNaughton produced a piece that shows women talking about their experiences with tattoos and piercings. The episode concludes with an interview with Claes (Creator, Choreographer and Director of Mia Culpa Part II, of the SM Trilogy) by Robb Atkinson.

(02:40:45 – 02:44:45)
This part of the tape shows the end of an episode of West Side Profile with host Ted Lederer, followed by Rogers Community Cable interval spots showing outdoor scenes from Vancouver.

(02:44:46 – 03:13:34)
The June 1993 episode is on location at Carnival on Commercial, part of the Stonewall Festival in the Park and is hosted by Penny Chalmer and David Yerrell. Interviews with attendees are by Lisa Currie are interspersed throughout the episode. The first segment is an interview with Bryan Fair (Carnival Organizer) by Robb Atkinson. Alan Herbert is then interviewed by Robb Atkinson about the inclusion of sexual orientation on the census. Gerry Kowalenko reviews the film “The Boys in the Band” and the episode concludes with Rob Wolvin talking about the upcoming Pride Parade.