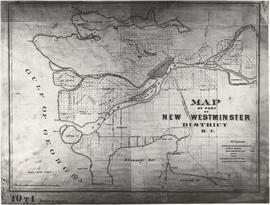 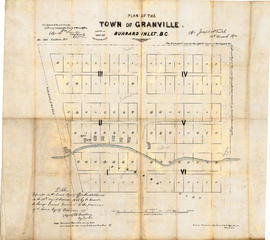 Plan of the town of Granville, Burrard Inlet, B.C.

Item is a map of the Town of Granville, Burrard Inlet, B.C., including the area north of Hastings Street between Cambie and Carrall streets, including lots designated for what became fill lands north of Water Street. Crown grants and government reserve lots are noted.

This map is a tracing made at an undetermined date of an 1885 tracing (attested by the Chief Commissioner of Lands in Nov. 1885) of the original 1870 map attested by Joseph Trutch. The 1885 tracing, from which this map was made, had been deposited with the Land Registry Office in 1885.

Note that map is oriented to the south.