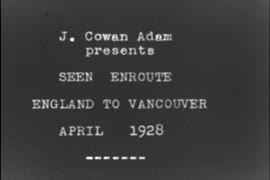 Item consists of a home movie documenting a journey from England to Vancouver. The route of travel was from Southampton, across the Atlantic to New York City, through northern Ontario and the town of White River, along Lake Superior, across the prairies, and finally through Fraser Canyon, BC. Each section is introduced and explained by title cards. The film includes shots of the RMS Homeric and the RMS Aquitania in Southampton port, the Statue of Liberty, the New York City skyline, landscape footage of Ontario, the prairies, Fraser Canyon, and the Cisco Bridges. 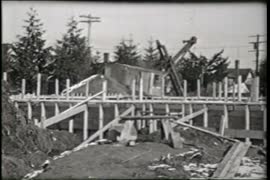 Item is a videocassette transfer copy of a 1938 amateur motion picture film depicting a year retrospective for 1938 for the Adam family. The film depicts the family's new house (5689 Angus Drive, W. 40th Ave); travelled on the RMS Queen Mary from New York City to Southampton, England; prepared their yacht for the season; went on holiday to Qualicum Beach, Montague Harbour, and Deep Bay; moved into their new house; and had a baby.

The film also includes local events: construction of the Lion?s Gate Bridge; CPR pier D after being destroyed by fire; burning of a local ice and cold storage plant along with the efforts of firefighters to extinguish the blaze. Other locations visible in the film include Pier 54 in New York, Coal Harbour, the Marine Building and the Royal Bank Building in Vancouver.