At the range : Thursday afternoon "blacking the sights"

At the range : Thursday afternoon "waiting their turn"

Back of house at unidentified location 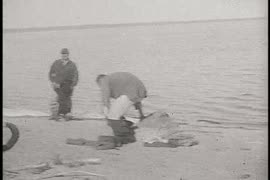 Item is an amateur film documenting Eric Hamber and five male companions bathing nude in a lake, game shooting with hunting rifle and spending time outside a log cabin.

Book: History of the Family of Werge

File also includes Vancouver Sun insert on the Their Royal Majesties' visit to British Columbia, May 27, 1939.

Book: addresses, out of town 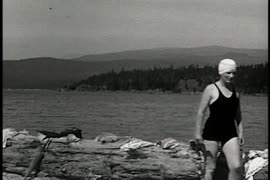 Item is an amateur film documenting Mrs. E. W. Hamber at a beach accompanied by several female and male companions in bathing suits getting ready for a swim. The film also shows footage of sailboats on the ocean, a boy holding a dog and three unidentified women in riding costumes on horseback at a ranch (possibly Minnekhada Regional Park in Coquitlam, BC). 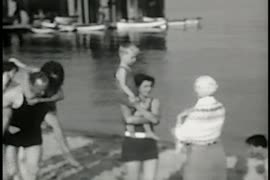 Item is an amateur film documenting Aldyen Hamber spending time at the beach with several male and female companions, all wearing bathing suits.

The Career series is divided into various positions which Eric W. Hamber held since university and are arranged chronologically. The sub-series in this section are the Dominion Bank of Canada; British Columbia Mills Timber & Trading Company; Lieutenant-Governor; Director; and University of British Columbia.
Outside of the isolated portraits taken possibly for business purposes, there are no images that show Eric W. Hamber when he worked for the Dominion Bank. The same is true for the more than twenty years he spent managing the BCMT&T Company, though a souvenir album of the 1919 royal visit to the Mill and a company photo album, which might have been used as a promotional tool for the mill's product line, have survived in excellent condition. Two unidentified portraits from the turn-of-the-century are thought to be early BCMT&T Company executives, possibly R.H. Alexander or David MacNair.
Images from Hamber's tenure at Government House have been further arranged to illustrate the events, functions and official duties of the Lieutenant-Governor, the Hamber's official portraits, and portraits received from royalty and dignitaries. The largest events at Government House appear to have been several garden parties that were hosted as fundraisers for the war effort which are documented on at least two occasions in 1938 and 1940. Other events include the Coronation of King George VI, Christmas at Government House, various rallies and troop inspections.
Photographs from the directorships that Hamber held at various companies are sparse and not representative of the yeras spent, or the importance of his involvement. In some cases his capacity is illustrated by a single group portrait (Dominion Bank: Board of Directors, 1937), company event (Crown Zellerbach 1956; C.P.R.), or in the case of the Toronto General Trust, not at all.
As chancellor of the University of British Columbia, Hamber is pictured in portrait, and informally at various ceremonies and dedications at the university throughout the 1940s and 50s.
The textual records in this series include clippings, official government documents, telegrams, speeches, correspondence, and other ephemera, concentrated mostly in 1936-1953.