Man and the sea

Item is a program for an exhibition at the Vancouver Centennial Museum, June 3-September 2, 1974, of Axel Lind seascapes photographed by Lennart Nilsson.

Item is a program of events at 85th anniversary celebrations, November 4, 1979, and includes brief history.

The look of music

Item is a concert programme and gallery guide to two series of concerts given in conjunction with the Look of Music Exhibition, Vancouver Centennial Museum, November 2, 1980, to April 5, 1981.

A tour sponsored by the Vancouver Museums and Planetarium complex : Great houses by Samuel MacLure

Remember Vancouver - souvenirs of our city

Exhibition sponsored by Woodward's and the department of Communications at the Vancouver Museum, April 7 to December 31, 1986 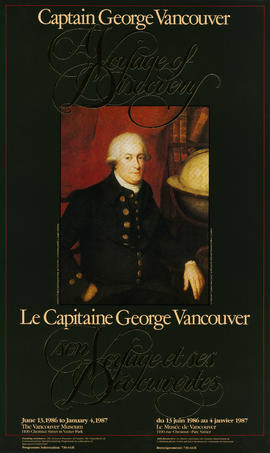 A voyage of discovery

Poster for exhibition at Vancouver Museum, June 13, 1986 to January 4, 1987 on Captain George Vancouver, in celebration of Vancouver Centennial

The walls have ears : war posters in Vancouver

The walls have ears, war posters in Vancouver

On China : Photographs by Hiroji Kubta

Item is a poster advertising an exhibition of photographs by photographer Hiroji Kubta at the Museum of Vancouver.

Vancouver Museum : your window on Vancouver and dressers for humanity

Vancouver Museum : calendar of events : of secrets, of lectures, of tours, of heritage, of diversity, of history : go forward, look back : 2002 October, November, December