Fonds AM255 - Imperial Order Daughters of the Empire fonds 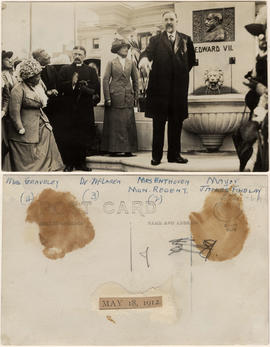 Imperial Order Daughters of the Empire

The Imperial Order Daughters of the Empire (IODE) was organized in 1900 as a patriotic, non-sectarian, non-partisan philanthropic organization of women who were British subjects.
The IODE provided assistance to the Imperial armed forces during the Boer War, World War I and World War II. They also provided civilian relief aid to the people of Vietnam. In addition the organization has provided assistance to the infirm and poor, and to university students (in the form of bursaries). They have also been active in civil defence, providing help to new immigrants, and providing funds and materials to schools across Canada.
The order was organized into primary, municipal, provincial, and national chapters. Primary chapters consisted of ten or more members from a local community. Municipal chapters were formed when a municipality had three or more primary chapters. Provincial chapters consisted of the officers of all of a province's primary and municipal chapters. The National chapter consisted of the principal officers of the order, as well as representatives from the provincial chapters.

The fonds consists of records made and received by various chapters of the IODE. Records include minutebooks, financial statements, correspondence, membership lists and other committee records, publications, photographs, and other materials.

The fonds was donated to the Archives in 1973 by Mrs. Du Vernet on behalf of the IODE.