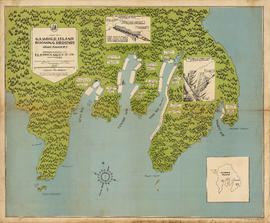 7.44 m of textual records and other material

Born Oct. 19, 1912 in Montreal Hubert Cadieux of Lantzville, B.C., was a professional seaman who served with the Royal Canadian Navy before and during World War II. After the war, Cadieux settled on Vancouver Island where he served with the B.C. Ferry Authority and Northland Navigation Ltd. He also operated a boat charter company in Nanaimo. In 1965, Cadieux was training officer for the Nanaimo Power Squadron and in 1966 he taught a navigational course to Nanaimo fishermen. In 1967, he coauthored "Dogwood Fleet", a history of the B.C. Ferry Authority. He also served as curator of the B.C. Maritime Museum at Esquimalt between 1955 and 1957 and was active in the World Ship Society, acting as custodian of its photograph collection. Cadieux died on December 31, 1980.

The fonds was bequeathed to the Vancouver Maritime Museum by Hubert Lindsay Cadieux ca. 1981 and transferred to the City of Vancouver Archives in 1982. Some publications to which Cadieux subscribed and which arrived after his death were evidently added to the bequest by the Cadieux family.