1988 directory of services : guide to social and health services in our community

A brief regarding social assistance

A brief to the Royal Commission on Health Services

A guide to health education of expectant parents

A picture of the Downtown Eastside : needs and services

A report on Skid Road

A report on the problems of illegitimacy

Item is a report prepared at the request of the Children's Aid Society.

A study of the Vancouver General Hospital

A total concept of care : a critical examination of health resources from acute hospital to home nursing care

An application to the Honorable Daniel R. J. Campbell, Minister of Social Welfare, for consideration under the Canada Assistance Plan

An application to the Honourable Daniel R. J. Campbell, Minister of Social Welfare by the City of Vancouver Department of Social Planning and Development for consideration under the Canada Assistance Plan

An invitation to participate in a study about services to students by special counsellors, pscyhological examiners, public health personnel

Application to City of Vancouver for increase in hospital construction : report

Brief by the section of physical medicine and rehabilitation of the Canadian medical association, B.C. division to the royal commission on health service, February 1962

Brief to be submitted to the Hon. Dan Campbell, Minister of Social Welfare, re adequacy of social allowances

Brief to the Royal Commission on Health Services

Item is an audio reel containing an episode of Brown Bagger featuring a talk by Peter Cameron. Description on tape case: "Peter Cameron, a representative of the BC Health Sciences Association was speaking at The Solidarity Coalition People's Commission on Economic and Social Alternatives, which held hearings in Vancouver December 1984. The commission was set up by Operation Solidarity to listen to and report on British Columbians' thoughts about the economy, the government, and BC society. The members of the commission include Margaret Marquardt - an ordained priest of the Anglican Church of Canada and chairperson of the commission, Mel Watkins - professor of economics of the University of Toronto, Jane Evans - vice-president of the action committee of the National Status of Women, Ray Haynes - senior labor relations officer with the BC Nurses Union and former president of the BC Federation of Labor."

Care of your legs and feet : to prevent arterial ulcers

Children and youth at risk : towards a mental health plan for metropolitan Vancouver 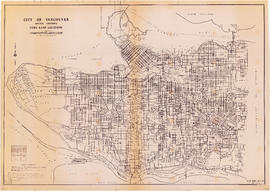 Community Radio Education Society : perspectives on development : in defense of public health : side B

Comprehensive systems of care for drug users in Switzerland and Frankfurt, Germany : a report from the 10th International Conference on the Reduction of Drug Related Harm and a tour of harm reduction services in Frankfurt, Germany

Directory of services : health, welfare, recreation in the Lower Mainland : 1970