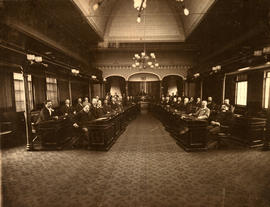 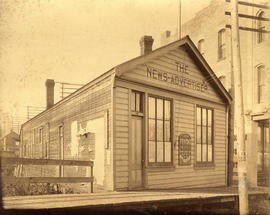 Francis Carter-Cotton was born in Yorkshire, England. He arrived in Vancouver in 1886. At the time, Vancouver had two newspapers the Daily News and the Daily Advertiser. Carter-Cotton, with partner R. W. Gordon, purchased both and founded the Daily News-Advertiser in 1887. Carter-Cotton was a long-standing member of the B.C. Legislature. From 1890 to 1900 he served as an MLA for Vancouver in the Semlin administration. In the last two years of that term he was appointed to the Cabinet, as Minister of Finance, and Chief Commissioner of Lands and Works. Defeated in 1900, he returned in 1903 as representative for Richmond. He was appointed President of the Executive Council in the McBride administration and held that post from 1904 until his resignation in 1910. In an active public life, he is noted as the first chancellor of the University of British Columbia (1912), first chairman of the Vancouver Harbour Commission (1913) and as a founder and charter member of the Vancouver Board of Trade.

The fonds consists of incoming correspondence from various notables of Carter-Cotton's time, among them Wilfred Laurier and Sandford Fleming. There are miscellaneous personal papers and legal documents, and a collection of early newspapers, including the first edition of the Daily News published after the Great Fire of 1886. Also included are photographs of the provincial legislature and the News-Advertiser.

Donated to the Archives in 1981 by Francis Vey.

Photographs in this fonds have been assigned catalogue numbers with the prefix CVA 299.