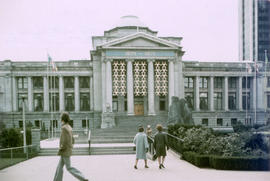 The Vancouver Courthouse was designed by architect Francis Mawson Rattenbury and built between 1907-1910. Between those years, however, Vancouver's economy boomed and its population doubled; the resultant increase in litigation rendered the Courthouse space inadequate as soon as it opened. The government commissioned a rival of Rattenbury's - Thomas Hooper - to design an additon to the building, which was completed in 1912. Additional renovations were carried out by the B.C. government in 1952, but by 1959 it was clear that Vancouver had again outgrown its courthouse; however, plans to add another wing did not materialize at that time. In 1967, the Community Arts Council commissioned the firm of Erickson/Massey to conduct a study on the impact of potential development of the downtown core, particularly of Blocks 51 (courthouse) and 61.
Initial plans for a highrise office block were scrapped with the demise of the W.A.C. Bennett government and plans to develop a three block complex - 51, 61 and 71 - proceeded in 1972 under the N.D.P. government of Dave Barrett, and the also newly-elected TEAM city government.
In 1974, Arthur Erickson was engaged to do a feasibility study on what possible civic use could be made of the old courthouse. Although several alternatives were presented, conversion to a new home for the Vancouver Art Gallery emerged as the most promising idea. In 1983, after extensive renovation of the old courthouse according to Erickson's designs, the Vancouver Art Gallery opened in its new setting.

This collection was donated by Eva Matsuzaki, an architect with Erickson's firm, who was project supervisor for the courthouse renovations.

Collection consists of records documenting the early study phase of the project to re-purpose the old provincial court house which eventually resulted in creation of the present home of the Vancouver Art Gallery.

Records consist of a photographic survey of the interior and exterior prior to renovations, a two-part feasibility report prepared for the City in 1974, and architectural drawings of the courthouse from original construction through a number of additions and renovations to the early 1970s.

The large majority of the drawings are photostats and are most are significantly degraded and difficult to read.

Photographs in this fonds have been assigned the prefix CVA 726.

Access to architectural drawings in this fonds is restricted indefinitely due to FOIPPA legislation. Researchers wanting to access these files must complete an 'Access to restricted records' agreement and may be required to seek permission from the building owner. See archivist for details.