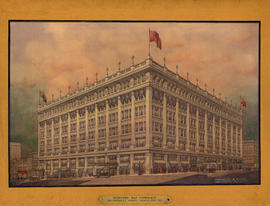 155 architectural drawings : 130 ink on linen, 24 blueprint on linen, 1 ink and pencil on paper with colour wash

Burke, Horwood and White was a Toronto, Ontario based architectural firm which existed from 1908 to 1919 and designed a variety of buildings across Canada. The partners were Edmund Burke and J.C.B. Horwood, who had entered into a partnership in 1894, with the addition of Murray White in 1908.

John Charles Batstone Horwood (1864-1938) apprenticed to Langley, Langley and Burke as a student, then was with Clinton and Russell in New York City (1889 to 1894) before his partnership with Edmund Burke. Murray Alexander White (1870-1935) apprenticed with Langley and Burke from 1889 to 1893 before moving to Chicago, where he worked with the firm Holabird and Roche. In 1908 he returned to Toronto and became a full partner in the firm Burke, Horwood and White.

The firm designed buildings in various historical styles, but for commercial buildings always with an emphasis on modern materials and methods of construction, such as glazed terra cotta, early iron and reinforced concrete frames, and contemporary advances in fire protection.

The firm was renamed Horwood and White in 1919 after the death of Edmund Burke, and existed under that name until it was wound up 1969 by its last senior partner, E.C. Horwood.

Horwood and White was a Toronto, Ontario based architectural firm which existed from 1919 to 1969 and designed a variety of buildings across Canada.

The company carried on the work of its predecessor firm in department stores, commercial buildings, churches, industrial plants and residences. In Vancouver, the firm continued the work begun by Burke, Horwood and White on the Hudson's Bay Company store on West Georgia Street, designing a number of additions and alterations to the original building in the 1920s.

The collection includes preliminary, construction and as-built drawings pertaining to the 1925 addition and 1926 replacement of original 1893 building on the site. The drawings are primarily mechanical, HVAC, plumbing and electrical drawings, though the collection does contain some drawings of architectural designs. The drawings are depicted as floor plans, elevations, sections, details and schematic diagrams.

The drawings include reference copies of drawings from the construction of the 1913 addition to the 1893 store, the earliest part of the building still standing. The collection also includes a watercolour rendering of the store done at or after the completion of the building.

The material was donated by E.C. (Eric Crompton) Horwood in 1973.

Restriction details: Fonds contains architectural drawings of a standing structure. Access is restricted to all drawings for security purposes, with the exception of exterior elevations, designs for interior and exterior ornamentation, and the perspective rendering. Please refer to file and item-level descriptions for more information on restrictions and procedures for accessing this material.

More information on the Archives of Ontario's holdings may be found at www.archives.gov.on.ca.