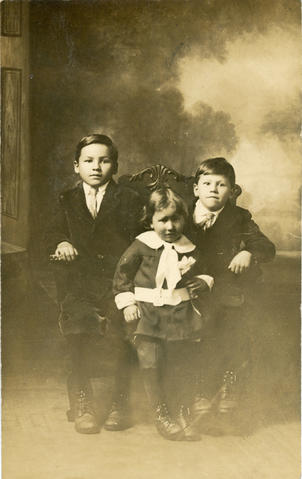 Collector/curator's description reads: “C. 1916, Vancouver. Photo of siblings (L to R): Michael Dragan (born 1909), James Dragan and Walter Dragan. A portrait studio photo taken about a year or two later, does not contain James. They were Ukrainian but in the 1911 Canada [census?], their parents, Alex and Oleni Dragan, would claim the family was from Galacia (then part of the Austria - Hungarian Empire) and that their ethnic group was Ruthenian and Greek Orthodox religion. Galacia covered an area of Poland, Romania, and Ukraine. Michael spend his whole life in the logging industry starting in a sawmill just after high school. He worked in various logging camps up the coast and later became a partner in a sawmill near Brandywine Falls (close to where Whistler is today). Michael later moved back to Vancouver and worked at Bay Forest Lumber for the rest of his working life. At Bay Forest he performed many duties such as timber cruising, road development and, during the winter months, did map work in the office. Walter held many jobs including chauffeur, truck driver, and longshoreman.”