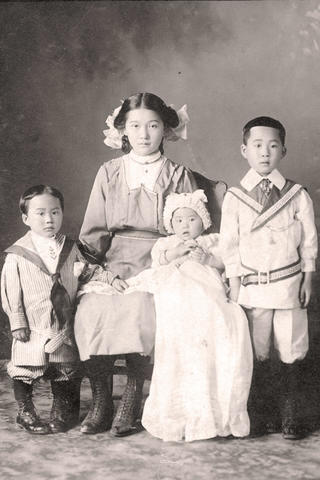 Collector/curator’s original description reads: “C. 1911, Vancouver. Portrait of the children of CHOW Ten Lam. This photo was taken the same day as a family portrait which included the parents. (Left to Right) Henry; Lillian; Baby Victoria; and George. Their father, Chow Ten Lam, who arrived in Canada in 1897, earned a living doing many different things. Over his lifetime, he was as an accountant in his uncle’s store; he was a news correspondent for a Chinese newspaper; a partner in a wholesale grocery business and finally an interpreter and general insurance agent. Early on, he learned English from a Methodist Sunday school teacher. Their father was eventually baptized and the Chow family were one of the first Chinese Christian families in Canada.”