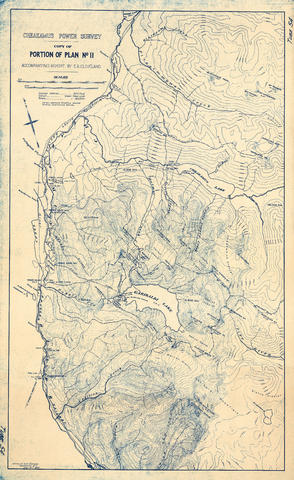 Map is a topographical plan showing elevations and the location of power houses, dams, pipelines, tunnels and railways as well as mountains, glaciers, creeks and lakes in the Garibaldi Lake area. The map shows the area approximately between the Cheakamus River in the west and Pitt River in the east, and between Green Lake in the north and Rampart Lake in the south.

The map is a tracing of a portion of one of the maps created by E.A. Cleveland in 1931 and was included in the appendix to his report to the City of Vancouver on the hydro-electric capacity of the Cheakamus River system (the atlas of maps accompanying the Cleveland report is MAP 939). Sheet 11 of that atlas was a copy of the map Topographical map of Garibaldi Park, published by the British Columbia Department of Lands in 1928, a copy of which had been used as a base map to note elements of the Cheakamus River hydro-electric survey.