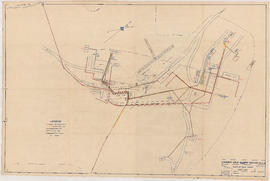 7.34 m of textual records, 17 technical drawings, and other materials.

The Cariboo Gold Quartz Mining Company Limited was a lode mining operation in the Cariboo District of British Columbia.
The company was formed in 1927 at the instigation of Fred M. Wells, a prospector, in order to extract gold from the quartz veins in the Jack of Clubs/Cow Mountain area. The initial officers of the company included: Vancouver physician Dr. W.B. Burnett (President), J.R.V. Dunlop (Secretary-Treasurer), Oscar Henry Solibakke (Fiscal Agent), Fred M. Wells (Director), and J. Carew Boulton (Director). Boulton later resigned and was replaced by T. Mathews. Mathews resigned in 1933 and was replaced as a director by Oscar Solibakke.
The company began with fifteen claims covering 750 acres in 1927. By 1961, it held over 4000 acres in mineral claims in the Cariboo. To obtain operating capital, shares in the company were sold to the public. Once enough shares were sold to finance operations, tunnels were cut into Cow Mountain to intercept the veins. Then, in 1932, a mill was built on Jack of Clubs lake to process the ore. Milling began in 1933 and the first gold brick was produced later that year.
As a result of this success, a number of other companies moved into the area to mine the quartz veins. The boom was referred to as a 'second gold rush,' and led to the creation of the town of Wells near the Cariboo Gold Quartz Mine at Jack of Clubs Lake. In 1933, the directors of the company formed the Wells Townsite Company Limited, in order to purchase, develop, and sell land for the town of Wells. In 1935, the Townsite Company amalgamated with and became a subsidiary of the Cariboo Gold Quartz Mining Company. A second subsidiary was created around 1936 when the Gold Quartz Hospital Limited was formed. In 1936, in order to acquire and develop a group of claims, the directors formed Cariboo-Hudson Mines Limited, which remained separate from the Cariboo Gold Quartz Mining Company.
In 1936, a fire destroyed the company's power plant, which delayed operations for three months. Work was also shut down for two months the following year due to a labour dispute, During the Second World War, the mine suffered from a shortage of workers, which led to the halting of all exploration activities. Following the war, labour conditions did not improve immediately, and in 1946, a province-wide miners' strike shut down the mine temporarily. Concern over these labour disputes and suspected communist agitations led the company to employ a private investigation agency beginning in 1937 to report on any suspicious activities in the Wells-Barkerville area.
In the 1950s, the company acquired two major mines: Island Mountain Mine (also on Jack of Clubs Lake) in 1954, and French Mines (near Hedley) in 1956.
In 1955, J.R.V. Dunlop died and was replaced by E.R. Tindale. Fred Wells died in 1956, and in 1962 Dr. W.B. Burnett and Oscar Solibakke were removed from the executive of the company. Burnett was replaced as President by J. Royden Morris.
In 1963, capitalisation was increased from two to four million shares for purposes of development and diversification. Other mineral interests, such as copper interests in Washington State, and petroleum and natural gas interests were then acquired.
Gold mining operations in the Cariboo ceased in 1967 when increased costs and a failure to find high grade ore bodies caused the company to close down the remaining mines at Wells. In 1970, the company disposed of its majority interest in Williams Creek Cariboo Gold Quartz Mining Limited (which had been held jointly with Noranda). In 1972, the Cariboo Gold Quartz Mining Company Limited was amalgamated into Coseka Resources Limited. In April of 1973, Wharf Resources (formerly Plateau Metals and Industries) amalgamated with French Explorations Limited (a wholly-owned subsidiary of Coseka Resources). Wharf Resources then acquired the ninety-one remaining claims of the Cariboo Gold Quartz Mining Company Limited in the Wells-Barkerville area, and then began to explore and redevelop the old mines.

The fonds consists of records created and received by the Cariboo Gold Quartz Mining Company Limited, regarding its mining operations and operation of the Wells Townsite Company Limited. Records include: minutes of meetings, correspondence, journals, plans and reports, scrapbooks, newspapers, and other materials.
Fonds contains three series:

The fonds was purchased by the Archives in 1974 from Mr. Ron D'Altroy of the Vancouver Public Library.