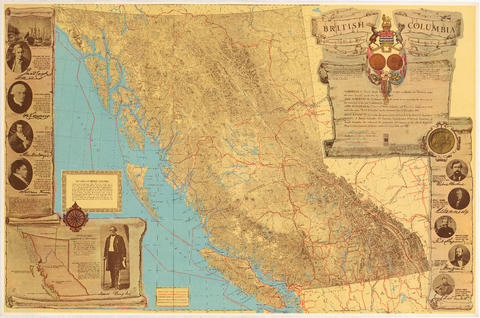 Item is an illustrated map is of the province of British Columbia, created to commemorate the Canadian Centennial.

The central component of the sheet is a reproduction of part of a map from the Department of Lands; surrounding the map are illustrations depicting prominent historical figures and accompanying information. The map has been annotated with the routes of Captain Cook's voyage (1778-1779), Captain Vancouver's voyage (1792-1794), and the overland routes of Sir Alexander MacKenzie (1793), David Thompson (1806-1811) and Simon Fraser (1808).

Portraits, accompanied by short biographies, are included for Cook, Vancouver, MacKenzie, Fraser and Sir James Douglas. Six other portraits are of the early governors of the colony of Vancouver Island and of British Columbia between 1849 and 1876. An illustration of the Great Seal of the Realm attached to the royal commission appointing Richard Blanshard the first governor of the colony of Vancouver Island is shown. A short textual description of the birth and expansion of British Columbia is included with an accompanying illustration of the expansion of the province over time.

A microfilm copy is available in the Reading Room.