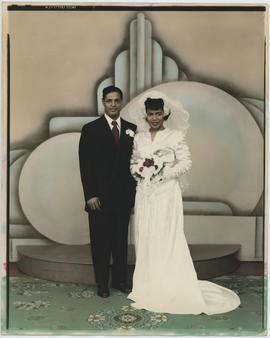 Collector/curator’s description reads: “Mid-1940s, Vancouver. Hand coloured wedding photo of Leonard and Edna Lawrence. It is the mid-1940s and Louis, who is from New Brunswick, marries the love of his life, Edna. Louis would be best known for his boxing career. In 1950, he turned professional boxer. Sparring in 25 bouts, he won 15 of those matches with a knockout. In 1955, Louis was crowned Canada's middleweight boxing champion. For some reason, after winning that title, he never boxed again. Louis worked for the Canadian Pacific Railway/Via Rail and raised four children with Edna.” 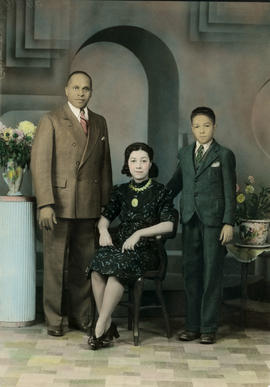 Collector/curator's description reads: “Circa 1937, Vancouver. Colourized family photo of (left to right): James Holiday McFadden; Vera (Taylor) McFadden and Charles Angus McFadden (born 1928). James had arrived from Virginia in 1927 and worked with the CPR as a porter. Vera's family had come to Nova Scotia, Canada via the Underground Railroad. The family lived for several years near Main and 5th. A favourite outing was a trip to Chinatown for a meal. The Hong Kong Cafe was a favourite diner.” 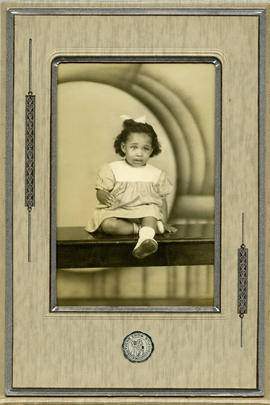